Errol Louis shares the techniques of his trade, career advice and inspiration for journalists interested in covering local politics with a particular emphasis on TV news, live interviews and commentary.

Like Errol says, "There's this common misconception that journalists are trying to take sides and try to help one politician win. I don't know anybody who does that. The reality is the politicians come and go and we stay here. I've been writing about politicians since Richard Nixon in the 1970s. I've written about at least five or six presidents. They come and they go, and we stay... So if you think about it in from the long term perspective I think you'll have a better sense of what good journalists do and why they do it.”

This lively lecture contains many real life examples from Errol's opinion columns, his live interviews with elected officials and his moderation of – sometimes rowdy – political debates. Errol cover why local politics are a question of life and death, how to find your passion and relate to audiences, how to present yourself on camera, how to prepare for -sometime contentious– interviews, and how to deal with liars.

Take this class whether you are a journalism student, a professional journalist or a member of the public curious to take a peek behind the scenes.

This video lecture is made possible in part by a grant from the News Integrity Initiative to "build enduring trust and mutual respect between newsrooms and the public through sustained listening, collaboration, and transparency."

The series was filmed in the Newmark J-School studio in New York. 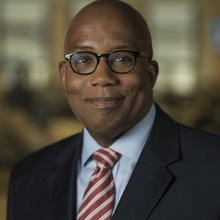 Errol Louis is the host of NY1’s “Inside City Hall,” the preeminent political news show in New York City. He teaches journalism with a focus on urban affairs at the Craig Newmark Graduate School of Journalism at the City University of New York. Previously, he served as a columnist and editorial board member at the New York Daily News and was a talk show host of WWRL radio. He has won numerous journalism prizes, and has taught at the Pratt Institute, Hunter College, Long Island University, and New York University. He has a B.A. from Harvard University, an M.A. from Yale University, and a J.D. from Brooklyn Law School.
Read Less
Enroll Free